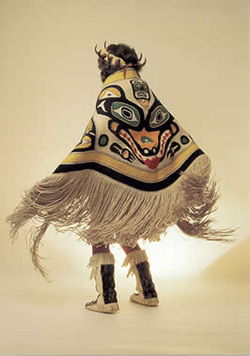 Not only was the clothing of the Tlingit people adaptive to their subarctic climate, but many of their distinct styles are considered an art form. Although most Tlingit people have adapted to modern eras in terms of clothing, traditional garments can be seen at potlatches, burials, and other organized cultural celebrations. Originally, however, Tlingit people were seen wearing loincloths and skirts composed of cedar bark near the warmer coasts, and deerskin clothing in inland Alaska. Although men wore snowshoes and moccasins with their pants and dresses, women preferred to traverse barefoot through snow. Raincoats were common with high amounts of precipitation; they were often crafted of cedar bark and spruce roots. Women often pinned their hair into two braids, while men left their hair loose-flowing. A centuries-old tradition, many Tlingit people display their heritage through clan emblems on their clothing and jewelry.

The Chilkat robe has gained significant attraction by being a symbol of Tlingit culture. These robes received their namesake from the Chilkat clan, a group of people noted for their incredible talent in weaving. Crafted from mountain goat wool and cedar bark strips, these pieces often feature the emblem of a person’s clan. Since each Chilkat robe consists of both horizontal and circular weaving patterns, they can each take one to five years to complete. Similarly to the Chilkat robe, the Raven’s tall robe also consists of a combination of geometric and herring bone weaving styles. This piece of clothing, additionally, is worn like a cape with black and white coloring. Due to its lengthy and involved process of creation, these costumes are often only seen on well-revered and respected clan leaders or chiefs. Both of these styles, however, can be adapted for use in leggings, medicine bags, tunics, and dance bags.

Although the instruction and creation of these two icons were nearly lost during the twentieth century, many people today, young and old, have revitalized the art of Chilkat weaving.

Nowadays, many Tlingit people dress in button blankets and dancing robes at traditional ceremonies. Influenced by Russian culture with the introduction of various colored felts, these pieces are often decorated with clan emblems. Many of these symbols are outlined with mother-of-pearl or solid beading, reflective of a clan’s heritage.

More often than not, one will wear a headdress with these outfits. They can be simple, such as plain headbands of cedar, spruce, or felt, or incredibly intricate. One example of a more extravagant style may consist of a potlatch hat of carved cedar, embossed with a colored crest, inlaid with abalone shells, and finished with ermine. Some, however, mainly worn by women at dances, are the Russian-influenced sailors’ hats of felt and beaded tassels.

Even in modern times, the Tlingit people are constantly reminded of their heritage through their attire. Nowadays, however, their culture can be conveyed through hair dressings, ear and nose piercings, bracelets, face paintings, and tribal tattoos.