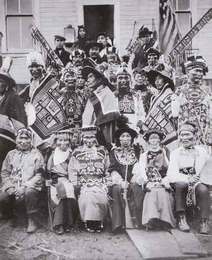 Unlike former American culture, women have always been the dominant family members in a Tlingit household. The Tlingit people are divided into three groups, known as the Eagle, Raven, and Wolf moieties. The largest of the three moieties are the Raven and Eagle moieties, whose emblems are shown above. One becomes a member of a moiety from birth; this matrilineal society means the child belongs to whichever group their mother was derived from.

Clans are the sub-group of each moiety, and each has their own emblem. For example, one could be of the Eagle moiety and the Killer Whale clan. The final subdivision of the clan is the house, which consists of an extended family under one animal name. These people, amounting to a population of forty to fifty, often lived together under a large, cedar-planked house. However, most now live in single-family homes, and these 100 foot-long buildings serve primarily ceremonial duties.

The clan and house to which you belong serves as the basic identifier within the tribe.

When a member of the Tlingit is to marry, they must court someone of a different, or opposite moiety. Although one is no longer ostracized if they do not marry someone who is not of their moiety, it is still frowned upon. Interracial marriage is on the rise; many Tlingit people are marrying peoples of other tribes, as well as Euro-Americans. Some of these people choose to abandon their Tlingit ways completely, while some outsiders are adopted into the opposite moiety so they and their partner can marry. These people continue to raise their family while being immersed in their culture.

Like many American native tribes, the women often performed the roles of housekeeping, childcare, and food gathering, while the men hunted and warred. However, the tradition of storytelling, creating art, and performing music were open to all. In addition, both women and men could assume leadership roles within a clan.

Tlingit children were often raised under the influence of their aunt and uncle, who taught these children how to survive, as well as participate, in society. Some are still raised under this method, but nowadays most Tlingit children are raised by their mother and father in single-family homes. They receive education via American schooling, and their heritage is taught to them through dance groups, traditional camps, and native education projects. Education has always been held in high regard throughout Tlingit culture, for most people receive post-secondary schooling and obtain degrees.